Heralding a New Era of Corporate Responsibility for Big Oil

EDITOR’S NOTE:  Each year, MCEA takes on a number of law students who are interested in environmental law. One thing (of many) that they do is research to help us better understand issues and recent developments in law that help inform our work, such as this important international legal decision on climate pollution. MCEA Law Clerk David Ivy-Taylor wrote the below piece so that MCEA attorneys and staff could better understand the recent decision in The Hague v. Shell and how it might impact our work in Minnesota on the climate crisis.

On May 26th, 2021 a District Court in the Hague, Netherlands (Judge Larisa Alwin presiding) issued a groundbreaking judgment in the fight against climate change.[1] In a case brought by Dutch environmental activists, Judge Alwin ordered Royal Dutch Shell, PLC, to “reduce the CO2 emissions of the Shell group’s activities by net 45% at end 2030 relative to 2019 through the Shell group’s corporate policy.” Although Shell had announced to investors a plan to cut emissions by 30% by 2035, this policy was challenged by environmentalists and was held to be “not enough” by the Court.[2] The judgment is remarkable for several reasons. First, it is the first time a private (i.e. non-governmental) party has been held to the decarbonization schedule laid out in the Paris Agreement.[3] Additionally, the judgment applies not only to Shell’s emissions resulting from their own business operations, but to their “Scope 3” emissions as well– downstream emissions resulting from the products they sell to customers. The judgment was based on an aspect of Dutch law that requires Dutch corporations to abide by an “unwritten standard of care”, which includes an obligation to respect human rights. In applying this standard, the Court found that there is an “international consensus that human rights offer protection against the impacts of dangerous climate change and that companies must respect human rights.”[4]

Although Shell has stated its intention to contest the judgment, it is currently in force and Shell must comply even while the judgment is being appealed.[5] As a Netherlands court judgment,[6] the ruling is somewhat limited in its direct enforceability in the United States. However, since Shell’s headquarters are in the Netherlands, a change in the company’s corporate policy there could have effects on its operations all over the world. Additionally, the judgment has been heralded as a paradigm shift in the legalities of greenhouse gas emissions (GHG) reductions: “This ruling will change the world. Worldwide, people are in the starting blocks to take legal action against oil companies following our example.”[7]

Other commentators are comparing the victory to the historic litigation against the tobacco industry.[8] The lawsuits against Big Tobacco are on many Minnesotans’ minds right now as Minnesota Attorney General Keith Ellison recently won a $81 million victory against R.J. Reynolds Tobacco and ITG Brand during the State’s effort to enforce the landmark “Master Settlement Agreement”[9](MSA), which  resulted from the  lawsuits  between Big Tobacco and 46 States. That litigation was based in the tobacco industry’s liability for the public health costs resulting from cigarette sales, and Big Tobacco’s promotion of cigarettes while concealing knowledge of tobacco’s addictive and harmful effects.[10] The MSA was not only legally significant, it signaled a societal shift as well: a change in the way the United States’ thinks  about corporate responsibility.[11] This is remarkably evocative of the Dutch idea of an “unwritten standard of care”, which was the legal underpinning for the Hague’s ruling against Shell. This concept appears to be gaining ground in the United States  as well: in June of 2020, AG Ellison filed climate change lawsuits in Minnesota against several key players in Big Oil, alleging consumer fraud, deceptive practices and false advertising[12] – just like the claims against Big Tobacco that resulted in the Master Settlement Agreement.

WHERE TO GO FROM HERE

Because the judgment was based in unique Dutch law, it is unclear if the exact same claim could be brought successfully in the United States. Creative lawyers may be able to follow the Hague’s example using related U.S. laws. While the United States has not yet recognized an environmental human right, the judgment notes that there is a growing “international consensus” that human rights include the right to a clean environment and sustainable climate. Notably, the United States is a signatory to and has ratified the International Covenant on Civil and Political Rights, which is one of the treaties cited by the court.[13] Additionally, Minnesota has its own Human Rights Act, though the statute focuses primarily on civil rights.[14] However, two Minnesotan environmental laws recognize the right to a clean environment and a sustainable climate. The Minnesota Environmental Policy Act states that it is Minnesota’s policy to “create and maintain conditions under which human beings and nature can exist in productive harmony, and fulfill the social, economic, and other requirements of present and future generations,”[15] and the Minnesota Environmental Rights Act declares that “each person is entitled by right to the protection, preservation, and enhancement of air, water, land, and other natural resources.”[16] These statutes offer broad protections and are well-practiced areas of law for environmental lawyers, and could potentially be used as a vehicle to challenge the state’s failure to police fossil fuel emissions, or even perhaps the fossil fuel industries themselves.

The judgment clearly has huge potential for changing how the public perceives the responsibility that extractive industries have for worldwide carbon emissions. Additionally, the judgment could be legally significant as well – particularly in the European Union (EU), where judgments can be enforced by co-Member States.[17] Questions remain as to how a court would enforce the order either in the EU or abroad, and the pending appeals by Shell could also change the legal landscape. But the degree of media coverage the judgment has received highlights its importance as a model for future cases, and the judgment could even result in changes to Shell’s worldwide operations in the immediate future. Shell has at least 14 major projects or facilities operating in the United States, though none are in Minnesota. However, as noted above, the Hague judgment applies to Shell’s Scope 3 emissions, which would include emissions resulting from gas station sales in Minnesota if the judgment can be enforced.

[6] Although the Hague also houses the International Court of Justice and International Criminal Court, this judgment arises from the national court.

[7] Stanley Reed and Claire Moses, A Dutch court rules that Shell must step up its climate change efforts, New York Times (May 26, 2021), https://www.nytimes.com/2021/05/26/business/royal-dutch-shell-climate-change.html

In 1946, the Minnesota State Fair was canceled because of a polio outbreak. Uncertainty was everywhere and no effective vaccine was yet available. Now, the world is on the verge of being polio-free. By Charles Read more…

July 2021 has earned the distinction of being the world’s hottest month ever recorded, according to global data released recently by NOAA’s National Centers for Environmental Information.  Elevated temperatures have worsened droughts and wildfires in Read more… 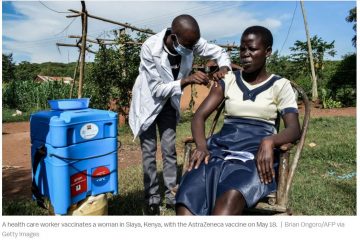 The Importance of COVAX and Saving the World: A Call to Action

COVAX is a joint venture of the World Health Organization, the Center for Epidemic Preparedness and Innovation, the Vaccine Alliance and UNICEF. The idea of COVAX is to ensure global equitable access to vaccines by Read more…